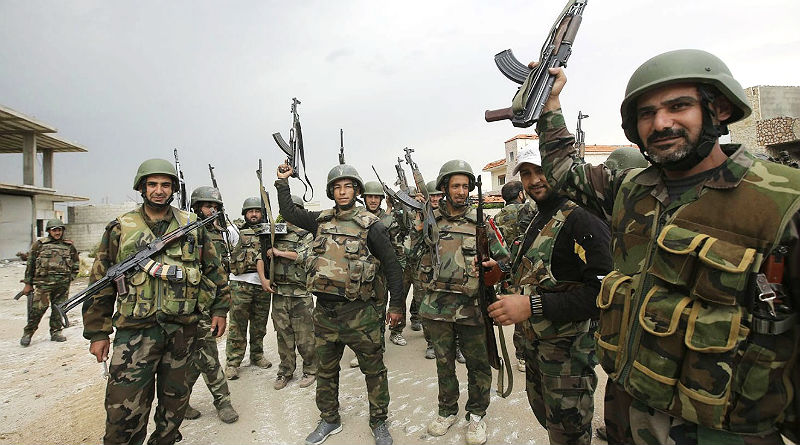 Turkey’s Syria adventure is heading into deeper uncertainty, facing obscure American and Russian moves and the bitter realities of the field. The idea was to finish the operation against the Kurds in Afrin quickly and march on to Manbij. Then, Turkey’s military planned to cross to the eastern side of the Euphrates River and deliver major blows to the main body of the Kurdish «democratic autonomy» in areas like Ras al-Ain and Tell Abyad, where Kurds do not have ethnic majorities.

Turkish President Recep Tayyip Erdogan is determined to put an end to the de facto Kurdish autonomous body in Syria. However, Syria upped the ante this week by agreeing to send its supporting militias to back the Kurds in Afrin.

As for the United States, Secretary of State Rex Tillerson‘s Feb. 16 visit to Ankara somewhat improved relations with Turkey — relations that were heading into an abyss because of issues like Fethullah Gulen, the trial of an Iranian-Turkish businessman in New York and the Pentagon’s alliance with Syrian Kurds against the Islamic State (IS). During Tillerson’s visit, the United States acknowledged Turkey’s security concerns and agreed to form a committee to find a joint solution, which no doubt contributed to the optimistic mood. Ankara demanded that the Kurdish People’s Protection Units (YPG) be removed immediately from Manbij, but agreed that Turkish and American soldiers can jointly provide security — a constructive move, despite Erdogan’s occasionally tough rhetoric.

Tillerson adopted a reconciliatory stand by saying the committee will make Manbij a priority. But Tillerson also hinted that joint security might not work in the areas liberated from IS by saying, “The reason for us to base soldiers in Manbij is to ensure that the town remains under the control of our partners.”

That’s a sticky sentence. The United States considers the Syrian Democratic Forces (SDF) a partner. Playing a large role in the SDF is the YPG, which Turkey considers a terrorist-affiliated group.

Will the United States remove the YPG from authority in Manbij and seek an interim solution that would appease Turkey? Perhaps in return for Manbij, the United States could extend its presence east of the Euphrates River. The United States has demonstrated so far that it will hold on to the areas it now controls in Syria. One signal that the United States plans to stay put came when the Pentagon designated funding for the SDF separately from money for the so-called Syrian «border force» in its 2019 budget.

There have been suggestions that Ankara and Washington could harmonize their anti-Assad efforts. But would that encourage Ankara to give up its goals east of the Euphrates? Not likely. And anyway, it doesn’t appear that Erdogan would be satisfied with controlling only Manbij.

Now that Syria is mobilizing pro-government militias to defend Afrin, all calculations could be upended. Erdogan fully trusts Putin to keep the Syrian army away from Afrin. Is that what Erdogan spokesman Ibrahim Kalin had in mind when he denied reports of an accord between the YPG and the Syrian army?

When a convoy of pickup trucks armed with anti-aircraft guns moved from the Shiite towns of Zehra and Muhur to Afrin, there was speculation that it might have been a move designed by Iran and Syria, which were unhappy with Russia easing its restrictions on Turkey. If Ankara hits a dead end at Afrin, its plans for Manbij will also be blocked.

Meanwhile, the Kurds are saying they aren’t short of solutions. They can also invite the Syrian army to Manbij, as they did in Afrin. To block Turkey’s plans, the local Manbij Military Council may prefer to hand over the area to the Syrian army.

The Kurds want to illustrate that they don’t lack alternatives if they don’t get robust, reliable protection from the United States. Although they resent Moscow giving Turkey the green light on Afrin, the Kurds did not hesitate to negotiate with Damascus. As Russia and Damascus are allies, the Kurds may still consider Russia a viable alternative to the United States. What happens next at Manbij could become a test of the US partnership with the SDF.

Turkey’s domination of Jarablus, which it liberated from IS in 2016, is not the same as taking control of Manbij, which was saved by other forces. The people of Manbij — who lived first under Islamist groups and then under IS, and who now are trying out «democratic autonomy» — can’t be expected to welcome Turkey with open arms when they see Ankara as the sponsor of groups that ruled them. If a new army is going to take over their town, it is natural for the people to prefer their own national army. The Manbij civilian authority comprises 13 committees made up of 71 Arabs, 43 Kurds, 10 Turkmens, eight Circassians, one Armenian and one Chechen, according to their population ratios.

The Kurds are disturbed because their population and political strength aren’t being considered in the bargaining for Manbij. Kardo Bokani, the media coordinator for the Democratic Society Movement, which governs Rojava (Syrian Kurdistan) and is the driving force behind the autonomy project, said the Manbij bargaining bears strategic importance for the Kurds.

“In the US handling of Rojava, we noted the differences between the White House and the Pentagon. Although the White House was more inclined toward Turkey, the Pentagon — with the commanders who contributed to the defeat of IS — was inclined toward the Kurds of Rojava. When there is discrepancy between the political and military quarters about who to support, military commanders may well have the final say,” Bokani told Al-Monitor. “Given the hard-line statements by American generals at Manbij, and US attacks against pro-regime forces at Deir ez-Zor, it is very likely the Americans will stay in Manbij. The worst scenario would be the withdrawal of US troops from the town, as the Russians did at Afrin. If that would be the case, the same scenario as Afrin could be staged also at Manbij.”

Can the Kurds give up their aims to control Manbij to safeguard their gains east of the Euphrates? For the time being, the Kurds say they will not give up their gains to defend American interests. But the seven-year Syrian civil war has amply demonstrated that nothing is impossible in Syria. Could anybody have anticipated that the Americans would set up a partnership with an organization (SDF/YPG) affiliated with the Kurdistan Workers Party, which Washington sees as a tool of the Syrian regime in addition to being on the US terror list? Could anyone have imagined that Iranian-trained forces, which the Kurds don’t trust, would join ranks with the YPG? Did anyone think they would ever see the YPG and Syrian flags in the same demonstration?

These things must be truly difficult for Turkey to fathom.