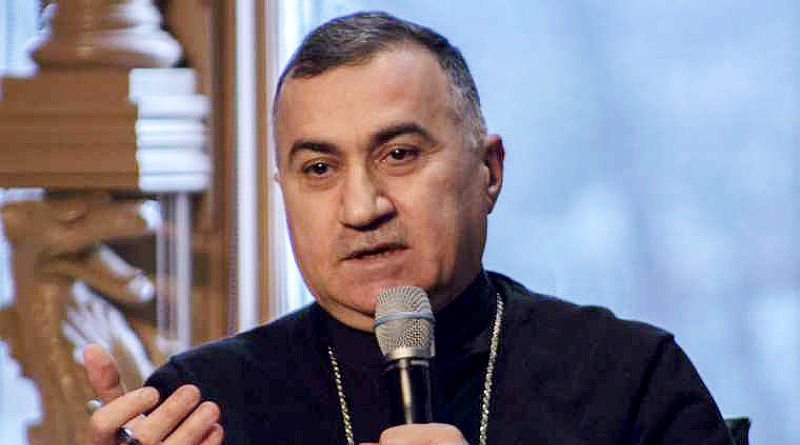 Washington D.C., Feb 19, 2018 / 04:30 am (CNA/EWTN News).- “Without an end to this persecution and violence, there is no future for religious pluralism in Iraq or anywhere else in the Middle East for that matter,” said Iraqi Archbishop Bashar Warda of Erbil in a speech at Georgetown University on Feb. 15.

The Chaldean Archbishop spoke of the state of Christianity in Iraq today and what both Muslim and Western leaders can do to help protect religious minorities and rebuild their communities.

“We Christian people, who have endured persecution in patience and faith for 1,400 years now face an existential struggle. It is possibly the last struggle that we will face in Iraq,” said Warda at an event hosted by Georgetown’s Berkley Center for Religion, Peace and World Affairs.

After an attack by ISIS displaced more than 125,000 Christians, Warda said that there is a core of the faithful who will not leave their ancestral homeland in the Nineveh plains in Iraq.

In a single night, ISIS took nearly everything from the bishop’s flock, leaving them “without shelter, without refuge, without work, without properties, without monasteries, without the ability to participate in any of the things that give our lives dignity,” Warda said.

“So few of us are left, some estimate 200,000 Christians or less,” continued the Chaldean bishop. “While it is true that our numbers are small, the apostles were much smaller.”

When speaking of the suffering of his people, the Archbishop also spoke of forgiveness.

He said he believes that this message of forgiveness is something Christians can witness to their Muslim neighbors in the Middle East.

“We say this to our Muslim neighbors, learn this from us. Let us help you heal. Your wounds are as deep as ours …We pray for your healing. Let us heal our wounded and tortured countries together,” he said.

Warda called on Muslim leaders to acknowledge that changes need to be made to protect religious minorities.

“It is not enough to say, ‘ISIS does not represent Islam.’ We need more.”

“I would encourage Muslim countries to come and step forward in helping by rebuilding Christian villages, Yazidis villages, to show some sign of solidarity,” Warda said.

As an example of this, he acknowledged the work of the United Arab Emirates: “Since the ISIS attack, they’ve been with us helping all — Catholics, Yazidis, Muslims.”

“There is a fundamental crisis within Islam itself and if this crisis is not acknowledged, addressed and fixed then there can be no future for Christians in the Middle East,” he said.

“We’ve been hearing some courageous voices from Islamic leaders concerning the need of change and the need to address this issue openly. It should be encouraged.”

He also stressed the importance of “honesty and respect” in inter-religious dialogue between Christians and Muslims.

Warda is working towards sustainable solutions to rebuild his community in northern Iraq. He sees hope in the new Catholic University of Erbil, which recently opened its doors thanks to the financial support from the Italian bishops conference.

“We, Christians who have the good news and the forgiveness of our Lord Jesus Christ, I think that we could offer something. We can open our schools, open our educational centers even to those who tortured us and to tell them, ‘Please, listen to who we are and let us know who you are. Within educational institutions, we really have the chance to know each other better well and grow in tolerance and respect for each other,” Warda told EWTN.

Christian and Muslim students study together at the Catholic University of Erbil, which will someday host up to 700 students. Today there are currently 82 students studying  economics, international law, English literature, accounting, and other degrees.

Dr. MaryAnn Cusimano Love visited the Catholic University of Erbil last year. She told CNA that she saw firsthand in Iraq “the courageous work that the Church is doing,” and encouraged Christian groups to give direct aid to Archbishop Warda.

“We can keep him in our prayers, we can give him our direct aid, and continue to keep them in solidarity whether our governments are or not,” she said.

When it comes to the crisis facing religious minorities in Iraq, Archbishop Warda stressed: “We Christians should not remain passive or simply pray for the best, we too have a critical role to play.”

Archbishop Warda also called on Catholics in the West for spiritual, moral, political, and material support for Iraqi Christians as they rebuild.

“How will the West react? My question is not rhetorical. The Christians in the Middle East want to know the answer.”