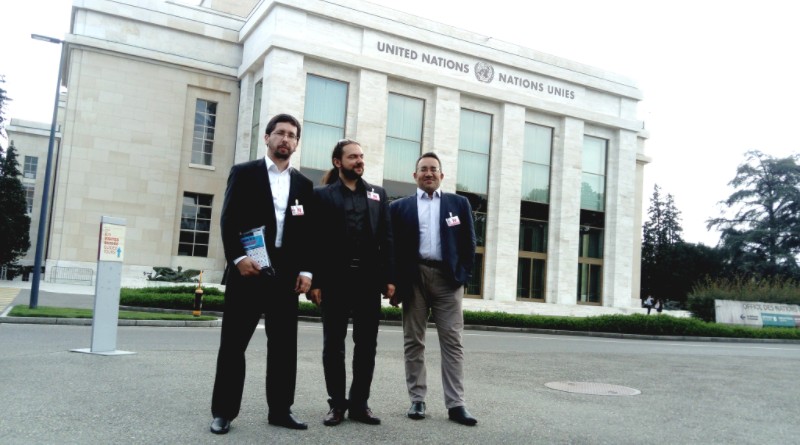 First of all I would like to thank you for the interest to the Report at such honorable international organization as the UN Human Rights Council.
It is a very important task to restore justice to t…he Memory of the innocent victims of the Nazi Regime and Nazi collaborators, and to restore justice to the victims and their descendants themselves. Our goal is to put an end to any possibility of revival of Nazi ideology, to stop glorification of the Nazi collaborators in Europe and everywhere else in the World.

1 As we mentioned at the Report there are states and territories on European soil and within the EU, where glorification of the Nazi collaborators and the Nazis is a part of the state agenda. We can mention the Baltic States and add Ukraine.

These states show ignorance of the International Law and the basic principles of the EU policies in this regard.

Lithuania, Latvia and Estonia turned into a sanctuary for antihuman and anti-Semitic ideas. Those ideas got there a save heaven, they were legitimized within the Baltic States, and got direct support from the governments. I want to underline that this happened and happens in the EU countries.

I believe that the processes I am talking about have already started to influence core EU countries in terms of legitimate reemergence of the far right and its agenda which colludes with extreme left agenda in its anti-Semitism and hatred against the Jews.

The processes already affect for example Germany. The heated discussion within German society and in the press whether Jews to wear kippas, or better take care of themselves and do not, this public dispute disrupts stability. The officials say do not and some native Germans go to the streets to protest with kippas or yarmulkas on their heads. I believe that harms both the local societies and the Jews and also society as a whole because it questions freedom and security in a democratic Western society and questions the ability of the authorities to maintain order.

The only way to deal with the problem of glorification of Nazi collaborators in the Baltic States and thus legitimization and revival of the Nazi ideology is compulsion on respective governments using International and legal institutions. We should make them follow international law and European values in combatting Nazism and anti-Semitism, start processes of restitution of stolen properties, paying compensations for it. So they will have to condemn anti-Semitism and its perpetrators, Nazi collaborators and brutal killers which at the moment are proclaimed heroes in the Baltic States.
Thus UNHRC could play its important role and use its authority, weight and influence to restore justice to the memory of those brutally killed, their descendants and heirs, both individuals and Jewish communities and organizations.

Thank you for your attention!