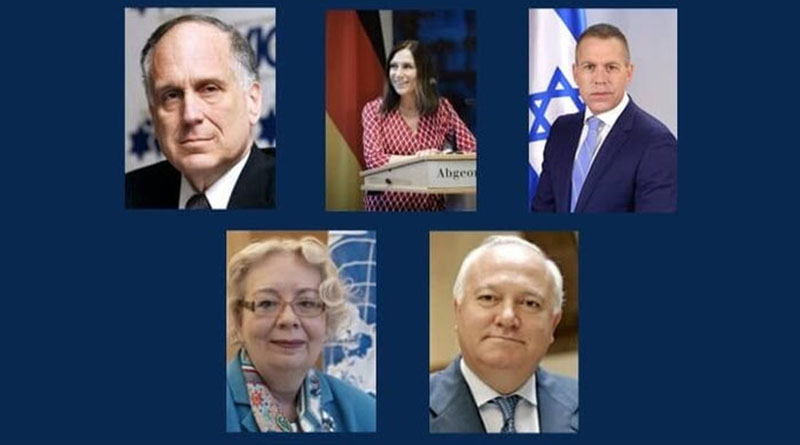 On November, 17 in New York at 18.00 Moscow time, a high-level event on the sidelines of the 75th UN General Assembly «The Role of the United Nations in Combating Anti-Semitism» was held. The event was organized by the World Jewish Congress (WJC) and the permanent mission of the Federal Republic of Germany to the UN, with the assistance of the missions of Albania, Argentina, Austria, Bosnia and Herzegovina, Brazil, Bulgaria, Canada, Cyprus, Czech Republic, Denmark, Estonia, France, Greece, India, Israel , Italy, Latvia, Romania, Slovakia and Uruguay.

Speech by Michael Chernov at The Role of the United Nations in Combating Antisemitism, NY, side event at 75 UN General Assembly

Mikhail Chernov, the head of the Board of the Fund for Support and Development of the Jewish Culture, Traditions, Education and Science.

The fight against anti-Semitism is a major world challenge in the nearest years.

I address the high-level assembly on behalf of the Fund for Support and Development of the Jewish Culture, Traditions, Education and Science.

Any form of racism, national and religious hatred is definitely no less disgusting than anti-Semitism. But still we highlight anti-Semitism!

The reason behind it is that our states and societies and even our civilization itself are in the deepest crisis. And in times of crisis, it is anti-Semitism that is one of the main catalysts that could ensure a slide towards new Nazism and a new world crash.

As a result of the rise of anti-Semitism in Europe and in the world, the Jews may be “re-blamed” for all the troubles that happen to humanity.

Pogroms of large Jewish communities will mark de-facto “moral legalization” of inhumanity in Europe and worldwide. We all went through this, and you shouldn’t go too far for historical examples.

Unfortunately dehumanization and degradation of our civilizational moral foundations is an ongoing complex process, and anti-Semitism is not it’s only component. The pressure on the old traditional European Christian confessions goes on and strengthens year by year. It combines demolitions and desacrifations of churches conducted by local governments and acts of vandalism and violence perpetrated by fanatics.

This general process goes hand in hand with anti-Semitism, rehabilitation of Nazism and leads to the destruction of the moral and humanistic foundations of society. It prepares the ground for a new war which is to be justified by dehumanization and inequality of peoples.

Russian Federation consistently and steadily makes great efforts aimed at changing the situation especially promoting at the UN General Assembly an annual resolution on combating the glorification of Nazism. Russian NGOs conduct researches which effectively create conditions for bringing to justice Nazi criminals and murderers of Jews who are still alive.

There is no doubt that anti-Semitism and its consequences should be rebuffed at the highest international level — at the United Nations.

Recommendations of the Fund for Support and Development of the Jewish Culture, Traditions, Education and Science :

First.
To adopt a new expanded UN Security Council resolution reaffirming the principle of non-application of the statute of limitations to war crimes and crimes against humanity, underlining and mentioning the Holocaust, crime of genocide based on xenophobia, racism and anti-Semitism.
Regularly upgrade this resolution on an annual basis, like the resolution on the fight against the glorification of Nazism.

Second.
To initiate the creation of a High-Level Group under the United Nations Secretary General to counter the rehabilitation of Nazism, racism, xenophobia and anti-Semitism.

Thanks all of You for Your Attention!