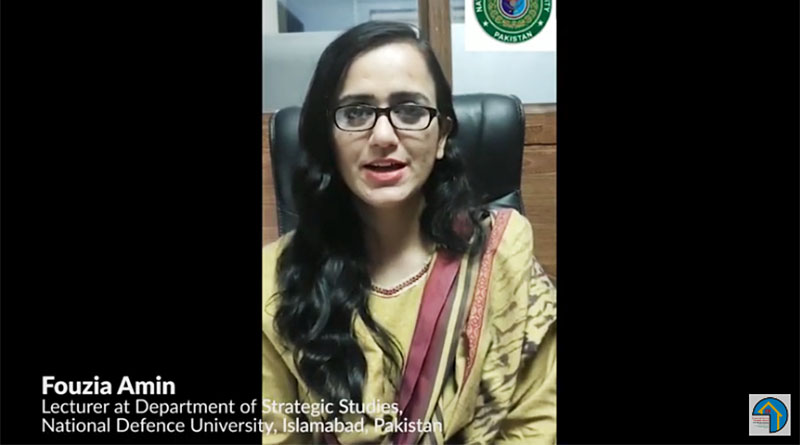 International conference “Russia-Eurasia: the value of peace for states and peoples”,  Moscow, 2020.12.04. The event was supported by the Presidential Grants Fund within the framework of the project «Russia-Eurasia: Cultural Policy in Strengthening Interethnic Peace and Interreligious Harmony».

Before I start my speech, I would like to thank the Russia-Eurasia team, especially Michael Chernov and the administration of Moscow State Linguistic University for inviting me to speak on this very important topic. Indeed, your forum provided me an opportunity to explain/express Pakistan’s position vision and desire to extend its strategic cooperation towards Russia in achieving security and development in Central Asian and South Asian regions.

The world is now shifting from unipolar era, to multipolar scenario, allowing states to carefully choose new allies and set new policies to protect their respective national interests and in process also create environments for the regional and international peace and cooperation at large. In this regard, since the last over one decade, Pakistan and Russia have entered into a mutually-beneficial relationship, thus, setting a renewed approach for regional geo-politics.

It is opined that both Russia and Pakistan alongside many other states oppose a uni-polar world and are in favor of rules-based balanced global order. However, to restore the rules-based world order, Russia being a Great Power is expected to take the lead role especially in the context of Central Asian and the South Asian regions.

In addition, the center of gravity of geo-politics is also moving towards Eurasia where China and Russia are moving closer on one hand while on the other hand the US and India are approaching a nearness in their opposition against BRI and CPEC. Moreover, the Indo-US strategic partnership in close alliance with Japan and Australia has also been tailored to contain China’s direct influence in South East Asian region.

By taking advantage of this strategic partnership, India also continues to adopt aggressive posture against Pakistan for its principal stance about the Kashmir dispute, a pending issue in the UNSC, since the 1947. In this scenario, Pakistan has emerged as a central state that can balance out the challenging propositions of these countries, provided it has the backing for Russia and China. I as a student of International Relations foresee the prospects of more cooperation between Russia and Pakistan in coming day that will help in regaining the balance global order.

Let me also highlight that Pak-Russia relations are not confined to just one area of cooperation, but include every facet of statecraft including military, politics, economy, society and culture. As for as the Pakistan-Russia strategic relations are concerned, these relations encapsulate the improving military ties between both countries. These involve the purchase of military armaments from Russia, the conduct of joint military exercises and the professional training of Pakistani soldiers in Russia. There are joint groups of both countries to debate and deliberate the issues of strategic stability, counter terrorism and other areas of interest.

Pakistan-Russia relations are dependent on the dictates of their geography. Both states are straddled by the Central Asian Republics however, the changes in Afghanistan have a direct bearing on them.  In this changing geopolitical structure of the globe, Pakistan is the gateway to Eurasia, as it can link markets with manufactures. Russia is one of the greatest producers of gas and has been the historical key player for Central Asia, while Pakistan can link these producers with consumers around the world. Such a relationship can offer the gradual strengthening of their bilateral relationship. Yet, to realize the dream of greater economic cooperation and bilateral relations, a peaceful Afghanistan having cordial relationship with Central Asian Republics and Pakistan is a must.

The significance of Pakistan is also evident in regional politics, particularly in Afghanistan and Central Asia. The emerging threat of the ISIS in Afghanistan, China-Russia growing cooperation and the pronounced role of geopolitics in Central Asia, have created environments for Pakistan and Russia to coordinate their strategic moves to protect their common interests of addressing the menace of terrorism in the region. To regain international peace, Pakistan has already fought ‘war on terror’ for over two decades and made huge sacrifices in terms of human and economic losses.  However, as a peace loving country, Pakistan would wish to continue its active participation for the peace and prosperity of both the Central and South Asian regions in close collaboration with Russia as well as China.

Moreover, through the CPEC, Pakistan’s vision of economic development and peace fits in Russia’s vision of Pan-Eurasian integration. Connecting Central Asia with South Asia, this corridor will become a convenient route for Russia. In the larger picture of Pak-Russia strategic convergence, Afghanistan evolved as a regional arena where, for the first time, Pakistan’s and Iran’s interests also converged.  It is true that Pakistan fits well in Russia’s geo-economic vision and it is more likely, also due to structural changes in the international order and system that Pakistan emerges as an important player in the Russian dream of Pan-Eurasian integration.

Finally, the economic activities generated from Russia and going across the world depends on the security environments of both Central Asian and South Asian regions. While the security state in Central Asian region is improving, the security situation in South Asian region especially in Pakistan is yet not up to the mark. It is due to India’s direct role in promoting terrorism in its two very important provinces namely, Khyber-Pakhtunkhwa (KPK) and Balochistan by using Afghanistan soil. Therefore, it is our collective responsibility to discourage India from undertaking such adventures because the menace of terrorism must be addressed collectively for the regional peace and security including the economic security. In this regard, since Russia enjoys good friendly relations with India therefore, it could play very important role in persuading New Delhi to stay away from such activities in the larger regional interest.

To conclude, I would say that if China, Russia, Pakistan and to a certain extent Iran would continue their strategic, economic and diplomatic collaborations and work for the prosperity of the South and Central Asian regions then it would also compel India at some stage to alter its aggressive designs in the South Asian region.