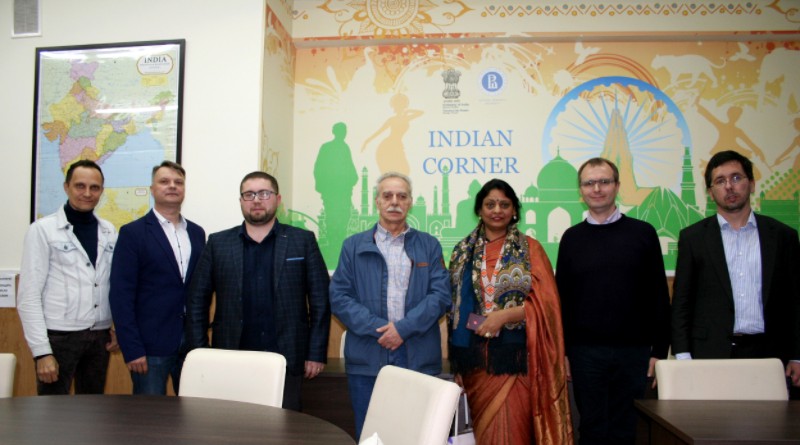 On Thursday, June, 27 School of Oriental Studies National Research University Higher School of Economic (HSE) held joint Russian-Indian round table Scope for Russia and India to Build Cooperation on Global Issues in the 21st Century. The event was organized in cooperation with Mosc…ow based Russia-Eurasia Project, New Delhi based NGO Caucasus-Asia Center and Foundation for Support of 21 Century Technologies (Moscow). The main goal of the discussion was to lay the foundation for boosting Russia-India cultural, educational and business cooperation in Eurasia.
The organizers invited special speaker Mrs. Purnima Anand to address representatives of Russian expert community gathered in The Indian Corner lecture hall at HSE. Mrs. Anand is a President of BRICS International Forum, expert at Caucasus-Asia Center, head of the International Federation of Indo-Russian Youth Clubs, advisory board member of Vidya Veda Foundation.

Purnima Anand noted that India and Russia enjoy special and privileged strategic partnership and unique relationship of mutual trust. The relationship covers all areas of cooperation, including in the spheres of political relations, security, trade and economy, military and technical field, energy, scientific, cultural and humanitarian exchanges, and foreign policy, and helps promote national interests of both countries, and contributes to the establishment of a more peaceful and just world order. But she also emphasized that “in terms of volume, the present figures do not reflect the strength of the relationship or the potential of our economies, which is immense”. Mrs. Anand urged the assembled representatives of expert and business communities to put forward and implement ideas for creating new specific platforms for cooperation. Organizers of the event Michael Chernov, head of the Russia-Eurasia Project, and Hriday Sarma, founder-coordinator Caucasus-Asia Center, strongly supported Mrs. Anand’s call. “The purpose of doing the event is to encourage an intellectual and entrepreneurial community from both sides to explore on new ideas for building cooperation. It engaged participants in a process to work on redefining the framework of existing bilateral cooperation in tune with prevailing imperatives. The event would not be a standalone one, rather it would be the beginning of Track II arrangement for striking cooperation at all levels between the two countries. The arrangement, with time, will encompass a network of credible organizations and prominent individuals from both countries willing to contribute for championing the cause of Russia-India relationship in the 21st century”, stated Mr. Sarma from New Delhi.

Host of the Round Table:

Vladimir Korovkin, head of the innovation and digital technologies laboratory of Skolkovo School of Management