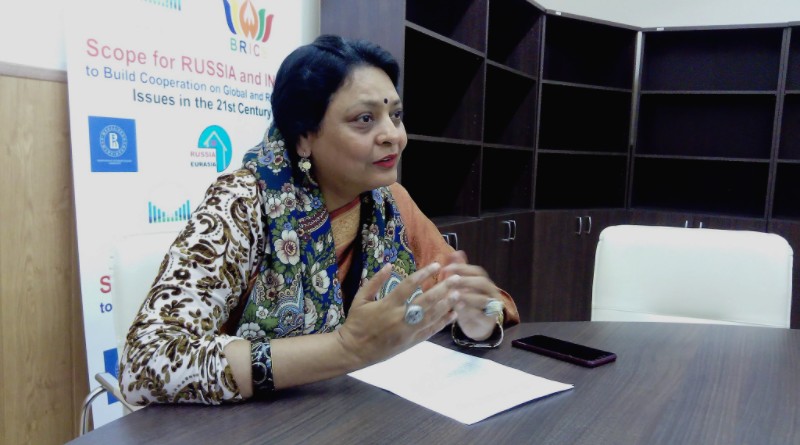 Indian-Russian special and privileged strategic partnership is a unique relationship of mutual trust between two great powers. Our relationship covers all areas of cooperation, including in the spheres of political relations, security, trade and economy, military and technical field, energy, scientific, cultural and humanitarian exchanges, and foreign policy, and helps promote national interests of both countries, and contributes to the establishment of a more peaceful and just world order.

Our bilateral relations are based on deep mutual understanding and respect, similar priorities in economic and social development, as well as in foreign policy. We favor the same approaches to ensuring peace and security and shaping a global architecture that reflects cultural and civilizational diversity and at the same time strengthens unity of humankind. India-Russia relations have stood the test of time and have been immune to external influences. Russia unwaveringly supported India in its struggle for independence and helped it to achieve self-sufficiency. In August 1971, both countries signed the Treaty of Peace, Friendship and Cooperation, which outlined fundamental principles of mutual relations such as respect for each other’s sovereignty and interests, good neighborliness and peaceful co-existence.

Two decades later, in January 1993, India and Russia reaffirmed the inviolability of those provisions in the new Treaty of Friendship and Cooperation. The Declaration on Strategic Partnership between the Republic of India and the Russian Federation of October 3, 2000, took the bilateral relations to a new level characterized by coordinated approaches towards ensuring international peace and security, addressing major global and regional issues, as well as close cooperation in economic, cultural, educational and other areas. This partnership was further elevated to the level of a Special and Privileged Strategic Partnership on 21 December 2010.

Advancing the comprehensive development of the Indian-Russian relations is an absolute priority of the foreign policy of both States. We will continue to widen our scope of cooperation by launching large-scale initiatives in different spheres and enhance and enrich our bilateral agenda so as to make it more result-oriented. India and Russia regard the establishment of the multi-polar global order in international relations as a reflection of natural and inevitable process of evolution of interstate relations in the 21st century.

The defence facet of the relationship is one of the strongest pillars of the India-Russia relationship and has withstood the test of time. India, with Russia’s cooperation, has achieved capacity building in strategic areas through acquisitions and development of weapons. The relationship is evolving from the traditional buyerseller one to that of joint production and development, with emphasis on technology sharing. Russia is committed to becoming a partner in the ‘Make in India’ programme.

We strongly condemn terrorism in all its forms and manifestations and stress that there can be no justification whatsoever for any acts of terrorism, whether based upon ideological, religious, political, racial, ethnic or any other reasons. Together, we will continue efforts to combat international terrorism, which poses a great threat to maintenance of peace and security.

Trade between the two countries is an area which has been identified for special focus by both countries. Bilateral trade in 2015 amounted to US$ 7.83 billion. In 2017 there has been an upward trend in the trade figures. In terms of volume, the present figures do not reflect the strength of the relationship or the potential of our economies, which is immense. Realising this, our leadership has set a target of total trade in goods and services of US$ 30 billion each way by 2025.

Russia is an indispensable partner in the sphere of nuclear energy and recognizes India as a responsible country with advanced nuclear technology with an impeccable non-proliferation record.

India and Russia have several ongoing cooperation activities in the areas of space, science and technology, education and research. A new High Level Science and Technology Commission was established in 2017. The Indian Department of Science and Technology and Russian Foundation for Basic Research have celebrated ten years of fruitful scientific joint projects. We have set up a Russia-India Network of Universities, and cooperation is underway in different aspects of space technology. The most recent area of cooperation which is emerging is the Arctic which has a lot of multi-disciplinary potential.

We are committed to work together to address global challenges like Climate change, Environmental protection, Clean energy, Cyber security, Affordable health care, Marine biology etc through scientific discoveries and to explore priority areas of common interest. We are working together to create networks of knowledge centers, connectivity of minds and scientific corridors to augment innovation led technology development for societal development.

Sharing common approaches to providing security in the use of information and communication technologies, we intend to stakeholderism with primacy of the State, in global internet governance.

India and Russia have strong cultural ties, which are an important contribution to the strong and robust relations between the countries. Historical linkages have contributed to creating goodwill between the nations. As the Prime Minister of India Shri Narendra Modi remarked, in India, every child knows that Russia is our country’s greatest friend and has always stood with us during the toughest moments.

The number of Indian tourists to Russia and Russian tourists to India has shown significant increase in the last five years. The two countries are taking steps to facilitate easier access to each other’s citizens.

We intend to further foster development of tourism and people-topeople contacts, including by easing the visa regime.

In the international arena both countries have similar positions and coordinate their actions. We cooperate closely within the United Nations, BRICS and G-20 groupings, as well as in the various structures in the Asia Pacific region such as ASEAN and East Asia Summit Forum. Russia supported India’s membership to the SCO and India was admitted as a full member of SCO in 2017.

The unique political proximity between the nations is reflected in congruence in global priorities. Both the countries share similar views on fighting terrorism without double standards, a more representative multi-polar world order based on international law with UN playing a central role, and resolving threats to international peace and security.

India and Russia have identified several new areas of cooperation. These range from deep sea exploration to building knowledge based economies based on science and technology, innovation, robotics and artificial intelligence, focussing on infrastructure, skill development, agriculture, shipbuilding, railways, aviation and greater connectivity, especially people-to-people contacts. Special focus will be given to cooperation between the younger generation and cultural sphere.

India and Russia will continue to remain a role model for harmonious and mutually beneficial partnership and strong friendship between States.

We are confident that India and Russia will continue to remain a role model for harmonious and mutually beneficial partnership and strong friendship between two states. Building on the shared vision of development of bilateral relations, we will succeed in further realizing the immense potential of India-Russia special and privileged strategic partnership for the benefit of our States and international community as a whole.