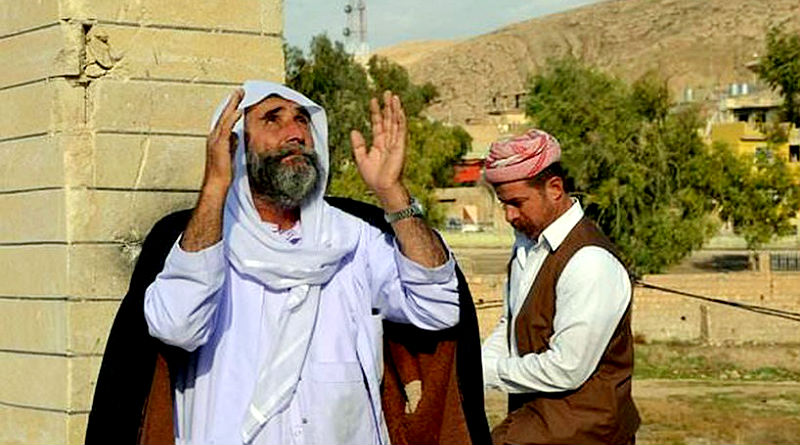 Photo: In Bashiqa earlier this month, Yezidis celebrate reopening a temple that had been destroyed by ISIS / AFP

ERBIL, Kurdistan Region — Iraq’s sole Yezidi member of parliament is “pessimistic” about what the future holds for minority communities in the country as it looks to recover from ISIS.  In a recent parliamentary session addressing the country’s May 12 elections, a number of MPs submitted a motion to the speaker of the parliament Salim al-Jabouri to increase the number of seats allocated to Yezidis under the country’s quota system, but were turned down by the speaker, MP Vian Dakhil told Rudaw English.

She said this is violates a Federal Court order issued earlier this month that ruled Yezidis must have more seats in the legislature, reflective of the size of the population.

Dakhil said she approached the speaker on four occasions to request a vote on her motion that was backed by 70 MPs, but the session ended without the vote.

“I am very pessimistic about the future of minorities in Iraq… [They] have been very much neglected,” Dakhil told Rudaw.

She explained that minority communities, Yezidis in particular, have not been represented fairly in the parliament.

According to the Iraqi constitution, each MP represents 100,000 people. There are an estimated 500,000 Yezidis in Iraq, meaning they should have five seats in the parliament.

The population of Iraq has increased since the rules were set, so should the seats in the parliament, argued Ashwaq Jaf, a Kurdish MP in the Iraqi parliament, stating that Kurds, who are the second largest bloc with 65 seats, are also victims of “blatant violations” in the parliament.

“There is no true democracy in Iraq, but only a façade,” she said.

Jaf believes the parliament is refusing to add seats because of costs, but the legislature did allocate a quota seat for Faili Kurd minority for the first time this year.

According to Ali Hussein Faili, a Faili journalist, the Iraqi parliament initially intended to give three seats for Faili Kurds in the provinces of Diyala, Baghdad, and Wasit, but ultimately assigned just one in Wasit.

The Failis may deserve more seats in the parliament, but their exact number is unknown since there are no recent official statistics, he explained, adding that some Failis prefer not be identified as such because they are living among other ethnicities.

According to unofficial statistics, there are roughly 1.5 million Faili Kurds in Iraq with the majority of them living outside Kurdish administrated areas in provinces of Diyala, Khanaqin, Wasit, and Baghdad.

After the devastation inflicted on Iraq, including many minority groups, by ISIS, Prime Minister Haidar al-Abadi has stressed the importance of rebuilding ties between communities as the country looks to its future.

Meeting with Yezidi and Christian religious leaders recently, Abadi highlighted the importance of the minorities in preserving the diversity of the Iraqi society.

In December, Abadi met the spiritual father of the Yezidi community in Iraq, Baba Sheikh Khurto Hajji, and emphasized “the keenness of the Iraqi government to take care of all the components of the Iraqi people and its commitment to give it the status it deserves. They are representing a dear part of our Iraqi people.”

He met with Christian leaders in January 2018 and conveyed a similar message to them, stressing “the need to preserve religious and sectarian diversity because it is the identity of Iraq and the source of its strength, noting that terrorism tried to erase this identity, but it did fail because of our nation unity.”

Abadi promised to bring the displaced minorities back to their areas and provide them with security.

The Iraqi government, however, has not provided the budget to rebuild these areas so far, Vian Dakhil has said.