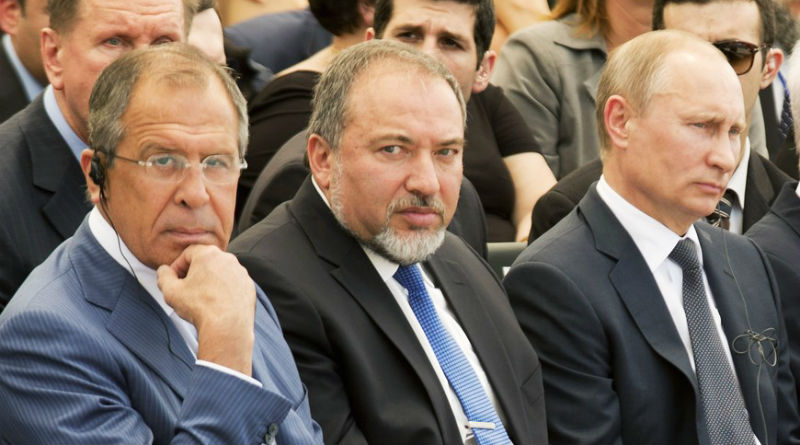 On April 25-26, Russia’s National Security Council hosted intelligence and security officials from 118 countries for the ninth International Meeting of High Representatives for Security Issues in Sochi.

Maxim Suchkov reports that the meetings have led to speculation that Moscow may be facilitating direct, or at a minimum, indirect contacts between Iran and Israel in order to defuse tensions in the region.

The meetings come as the potential for an Israel-Iran confrontation over Syria may be increasing. An Al-Monitor correspondent in Beirut writes, “Iranian officials vowed during the past week to take revenge for the killing of the seven Iranian soldiers, yet the strongest voice during this period was the one of Hezbollah’s leader, Hassan Nasrallah, who warned that Israel has placed itself in direct confrontation with Iran. Nasrallah said the ‘killing’ of Iranians was an act of ‘grave foolishness.’ It was clear that Nasrallah’s warning was aimed at sending a clear message to Israel that revenge for this attack isn’t going to be by Hezbollah, but rather by the Iranians themselves, which — if it takes place — could mean a different type of confrontation between the two regional enemies and might end with both of them breaking red lines that were in place for years.”

In reflecting on whether there may be lessons learned from Syrian-Israel understandings reached in 1976 to be applied to present tensions between Iran and Israel, Yossi Beilin suggests that what is missing is the “new Kissinger” to broker such a deal. “Someone from the White House would be a natural fit for the role, but the relationship between the Trump administration and Iran would preclude the United States from serving as a mediator,” he writes. “It could, in theory, be a special emissary of the United Nations’ secretary-general or some European party acting on behalf of the European Union’s high representative for foreign affairs and security policy. It should be someone with the backing of a structure that is capable of investigating any complaints of violations of these understandings, like the understandings on a partial cease-fire reached between Israel and Lebanon — more accurately, between Israel and Hezbollah — back in 1996.”

Or perhaps that role will fall to Russia. That Russia might be a potential mediator between Iran and Israel is no surprise to readers of Al-Monitor, which has provided unmatched coverage and analysis of Russia’s role in the region. Back in February 2014, we wrote that Moscow could play a “bridging role, perhaps through very quiet back channels, to calm Israel-Iran ties.”

Russian President Vladimir Putin’s motivation to increase his diplomatic efforts at this time may not just be because of the heightened regional tensions. Locked out of the groundbreaking diplomacy in Korea, Putin may be seeking to play his hand as power broker in the Middle East, where his diplomatic cards may prove decisive, if played well.

“The Russians are staying, a situation that Israel seems to prefer over a Russian withdrawal,” Beilin reports. “Israel believes it can talk to the Russians, and the overall assumption is that their global interests obligate them to adopt a more measured approach to the region. Nevertheless, the Russians will go home one day, too. All that remains to be seen is whether that happens sooner or later.”

“In recent months,” Suchkov writes, “there have been many claims that Russia is seriously challenged to continue its balancing act between Iran and Israel. The very nature of the growing confrontation on Syrian turf between the two archenemies is complicated. It’s hard to verify whether in its discussions with Tehran, Moscow is bringing up the issue of Hezbollah and other Shiite militias’ presence near the Israeli border. Yet the logic of Russia’s behavior in the region ultimately stems from attempts to understand and recognize the legitimacy of motivations of certain players — even when it doesn’t share them politically or finds them counter to its own interests. Judging by this approach, Moscow may find Hezbollah’s presence understandable from Iran’s perspective. At the same time, Russia certainly realizes that this presence serves as a constant irritant for Israel and is thus an escalation factor that can’t be ignored, if the Kremlin ultimately seeks to fix Syria for the long term.”

Suchkov adds, “Russia is indeed having a hard time in its role as a go-between for such die-hard negotiators as the Israelis and Iranians. For now, however, both Iran and Israel need Russia as an ‘airbag’ between one another. Such a status may not — and probably won’t — last too long, but so far it has been providing Moscow with the time necessary to elaborate on a status quo of moderation: Iran has to restrain Hezbollah’s provocative actions, and Israel needs to restrain its assertive responses and pre-emptive air raids.”

“Hitting a happy medium between the two regional heavyweights may be an honorary role, and if Moscow can cope with all the associated difficulties, it will make its presence in Syria indispensable,” Suchkov concludes. Russian decision-makers are accurately pointing out that the Israelis and Iranians are overestimating the influence Moscow has over the respective parties. Yet Russia itself has done a lot to solidify its image as a new power broker in the region and now has to deliver on these expectations. In fact, it’s hard to think of any other power uniquely positioned to cut this Gordian knot. Russia is preoccupied with finding a comprehensive formula to keep the parties from feeling endangered. The diplomatic drive is fueled by the belief that the alternatives to dealing with Iran are force-based scenarios discussed in Washington and Jerusalem that may essentially entail opening a whole new dimension to the Syria war and possibly unleashing a large-scale regional war.”

Saudi Crown Prince Mohammed bin Salman has made his mark, in good part, as a risk-taker and a champion of modernity, including a bold vision for economic reform and loosening long-standing cultural restrictions, including opening film theaters in the kingdom and even allowing women to attend professional wrestling matches.

But with regard to Iran, the Saudi approach is the most sectarian and reactionary in recent memory, rooted in the anti-Shiite teachings of Muhammad ibn Abd al-Wahhab, the 18th century founder of Saudi Arabia’s conservative brand of Islam, as Bruce Riedel writes. Abd al-Wahhab, Riedel recalls, “became an extreme critic of Shiism, branding them polytheists and infidels. Saudi armies sacked Shiite cities in Iraq, destroyed Shiite shrines in Mecca and invaded Yemen to try to defeat its Zaydi Shiite tribes.”

In a May 2017 interview, the crown prince ruled out reaching any type of accommodation with Iran because of its “extremist ideology,” which he linked to Shiism. “Their stance is that the awaited Mahdi will come, and they need to create a fertile environment for the arrival of the awaited Mahdi, and they need to take over the Islamic world. … Where are the common points that we might be able to reach an understanding on with this regime?”

Riedel said the Saudi war in Yemen “is a sectarian conflict overplayed by a regional struggle for power by the Saudis and Iranians. The war costs the kingdom a fortune and the ayatollahs a pittance, but it’s very popular with the Wahhabi establishment.”

“At home, King Salman and Prince Mohammed have led a ruthless crackdown on Saudi Shiite dissidents in the Eastern Province of the kingdom,” Riedel continues. “The city of Awamiyah has been pounded into rubble by the Saudi authorities. Satellite imagery shows whole neighborhoods destroyed. The execution of prominent Shiite cleric Sheikh Nimr al-Nimr led to the Saudis breaking of diplomatic relations with Iran. This, too, is popular with the Wahhabi clerical establishment.”

The Saudi campaign to weaken Syrian President Bashar al-Assad, mostly by the backing of radical Islamist groups that propagate similarly violent sectarian ideologies, such as Jaish al-Islam, has been a failure. The bizarre kidnapping of Lebanese Prime Minister Saad Hariri to pressure Hezbollah in Lebanon also backfired. The notion of Saudi armed forces replacing American troops in Syria, Riedel writes, “is an old proposal repackaged … [and] hollow given the performance of Saudi ground forces in Yemen.”

Riedel points out that “Iraq is the exception that proves the rule.” Saudi Arabia’s outreach to Iraq, however, has its limits. “Iraq is not a member of the Saudi-led Islamic Military Alliance, which is intended to confront Iran by the Saudis,” Riedel points out. “The Iranians have many more assets in Iraq than the Saudis, and they are determined to maintain their hegemony. The Saudis have no counter to Iran’s Islamic Revolutionary Guard Corps.”

Riedel concludes that ending the war in Yemen is the best step for de-escalating the conflict. But “Iran is unlikely to help,” he writes. “The war in Yemen is a major strategic advantage for Tehran. It bogs the Saudis down at little cost to Iran. But it is also dangerous, especially now that the Iranians have helped the Houthis’ missile capabilities. Riyadh is literally under fire. This is playing arsonist during a wildfire. The Iranians are particularly eager to humiliate Prince Mohammed, who has called [Iranian Supreme Leader] Ayatollah Ali Khamenei a 21st-century Hitler. Iran calls the crown prince infantile.”

In an interview with Al-Monitor April 22, Iranian Foreign Minister Mohammad Javad Zarif called for “dialogue” with Saudi Arabia. “But more importantly,” he said, “abandoning the illusion that Saudi Arabia needs a conflict with Iran in order to be able to push its agenda forward. I don’t think they need a conflict with Iran nor that they can afford one.”